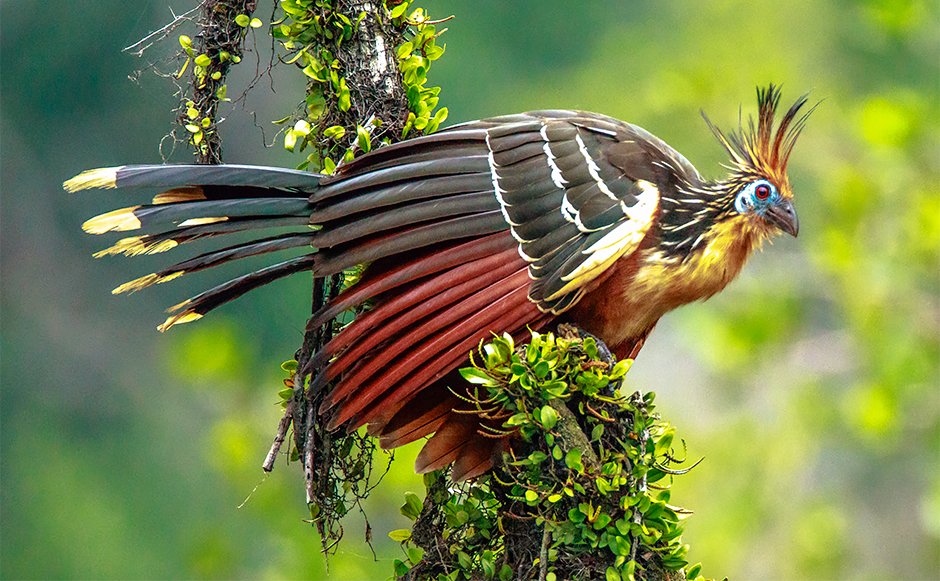 The Hoatzin is a beautiful and strange denizen of Amazonian forests. Photo by Murray Foubister

The Hoatzin: A Weird and Wonderful Bird

The Hoatzin is a chicken-sized bird with a blue face and an orange, mohawk-like crest. Several characteristics set it apart from all other birds.

The Hoatzin (Opisthocomus hoazin) is a Neotropical bird that lives along slow-moving rivers and lakes in the Amazon Basin. With a distinct appearance, loud calls, a tendency to live in social groups, and a clumsy way of moving through foliage, it’s not surprising that Hoatzins are fairly easy to find in their habitat.

(In case you’re wondering, the pronunciation of Hoatzin is HWAT-sin.)

Here are several cool things about the Hoatzin:

Hoatzins are ruminators. Like cows, goats, and sheep, Hoatzins digest their food with the help of bacterial fermentation. Those ruminating mammals have specialized sacs in their gut called a ‘rumen’, whereas Hoatzins have an enlarged esophagus and crop. The Hoatzin is the only bird in the world that uses these foregut compartments instead of a stomach to digest food. Its diet consists almost entirely of leaves, which pass into the bird’s crop, where the process of bacterial fermentation gets fired up.

The foregut bacteria produce enzymes that help break down cellulose in the tough leaf material. Some of the more than 1000 bacterial species found in Hoatzin crops are also found in mammalian ruminants, while other bacteria seem to be unique to these birds. Foul-smelling bacterial vapors exhaled by the Hoatzin are apparently what gave this species it’s nickname: “stinkbird.”

The digestion process takes a really long time– up to 45 hours– which is why these birds spend about 80% of their time lounging around; they often aren’t able to fly when their crops are engorged with fermenting leaves. Even on an empty stomach (er… crop, I mean), the Hoatzin isn’t a strong flyer because its sternum and flight muscles are less developed than those of other flying birds. There’s only so much room in the body of a Hoatzin and the flight muscles may have been reduced during the evolution of the species to make room for that huge crop.

Hoatzins reportedly not only smell bad, their taste is also pretty unpleasant. Maybe that’s why they haven’t been over-hunted like many birds.

Baby Hoatzins use claws on their wings to climb

Hoatzins build their nests in branches that overhang bodies of water, laying 2-3 eggs per brood. Each Hoatzin chick has two claws on the digits of each wing for the first 3 months of its life. If a Hoatzin nest is approached by a predator, the chicks will drop from the nest into the water below– plunk! These surprisingly capable swimmers paddle to safety and hide along the bank until the predator moves on. Then they use their little claws to climb back up the tree and into the nest.

The presence of wing claws in Hoatzin chicks once led scientists to investigate the possibility of a link between this species and the long-extinct Archaeopteryx, one of the earliest known flying animals that is related to early birds. But it turns out that numerous birds– including familiar species like chickens, ducks, and ostriches– have claws on the digits of their wings. These claws were present in the dinosaur ancestors of birds and some modern bird lineages still have vestiges of that anatomy.

So the claws of Hoatzin chicks are unusual because they aren’t mere vestiges of a dinosaur ancestry… they have an important, modern-day function in the survival of young birds!

Hoatzins are the last of an ancient, enigmatic lineage of birds

The Hoatzin is the only living species in the family Opisthocomidae and the only bird in the order Opisthocomiformes (That would be a great spelling bee word!). This means that the Hoatzin has no close relatives that aren’t extinct. Genetic research in 2015 indicated that this species is the only living representative of a lineage that branched off of the avian family tree about 64 million years ago, shortly after the great extinction event that killed all of the non-avian dinosaurs.

The genetic/evolutionary relationship of the Hoatzin to other birds is still a mystery. No amount of fossil or genetic data has yet to clear up where exactly they belong on the evolutionary tree of birds. Some previous research suggested the Hoatzin is most closely related to chickens (birds in the order Galliformes), while other studies pointed to the cuckoos (Cuculiformes) or one of several other groups as being the best match.

One thing we do know (from genetic data) is that the Hoatzin lineage is ancient and branches off of the avian family tree near the base.

The weirdness of the Hoatzin is what makes it wonderful. Every bird species is special in some way, but this one has some outstanding qualities that make it a bird celebrity of sorts.

Hoatzins don’t survive long in zoos, so you’re best bet for seeing one is to get to South America and find them in the wild!