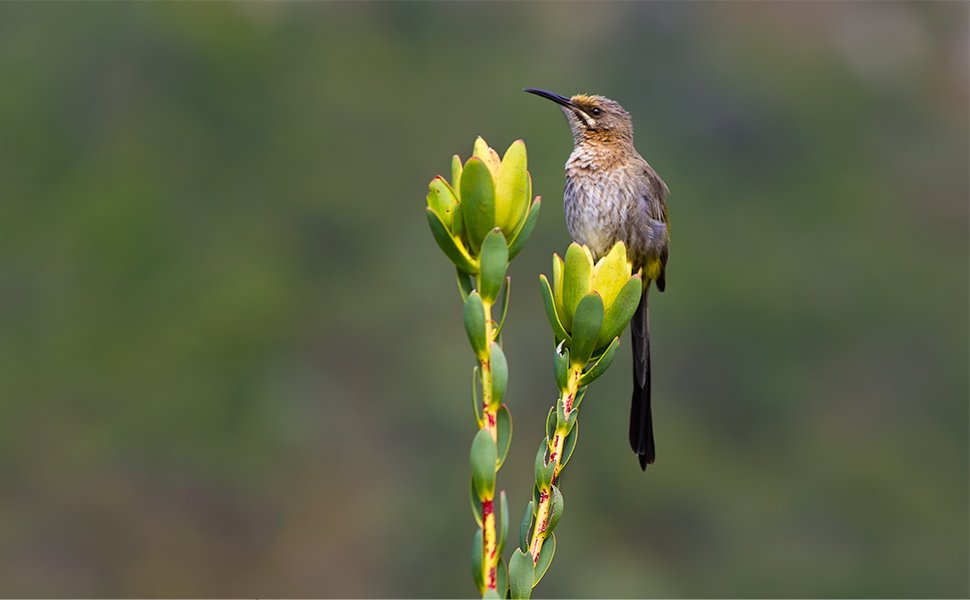 A Cape Sugarbird in South Africa. This species in endemic to the Cape Region, where it feeds primarily on the nectar of Protea flowers.

South Africa is a world-class destination for birding and mammalian mega-fauna. Sue Dietderich, the author of this report, was a participant on our tour there in November 2018.

There is a reason that this tour company is called “Wild Latitudes”. From the moment we stepped off the plane in Hoedspruit, to the minute we boarded the plane at the end of the trip in Cape Town, we were on a non-stop adventure of a lifetime.

The days were filled with new sights and sounds, new friends, and unique safari experiences thanks to the expertise of our guides, Steve Robertson of Wild Latitudes and Gary Freeman of South Africa. For me, this was primarily a birding trip, but I quickly craved to learn more about the African bush, animals, culture and people. 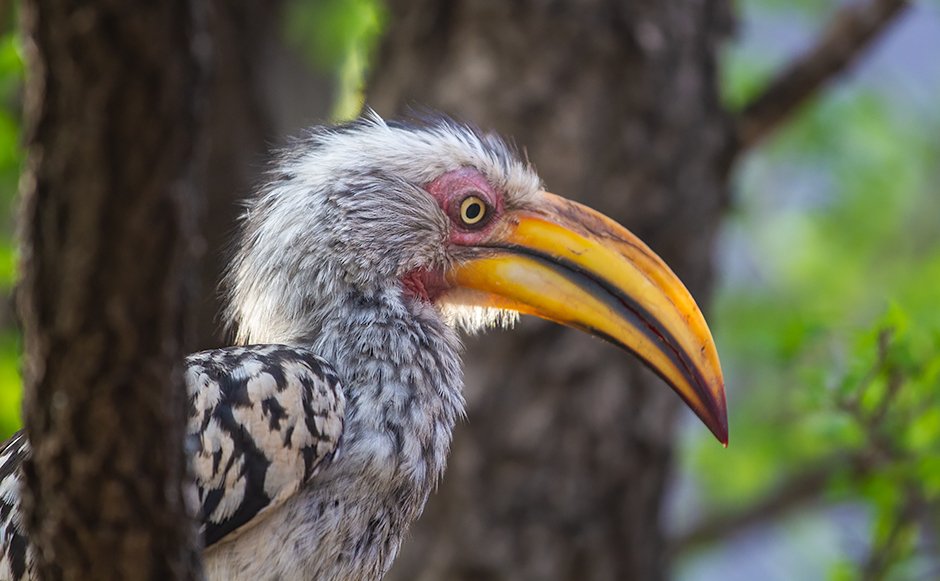 Our journey began at Gary’s Safari Camp in the Klaserie Private Nature Reserve. We had 5 wonderful days and nights here to become accustomed to this unbelievable land. The camp was a strange combination of the gentle rhythm of the bush, and exhilarating episodes of animal and bird encounters while on walking safaris. The camp facilities met our every need with comfortable tents, two unique outside bathrooms with modern plumbing, outdoor and inside dining areas, and a large viewing deck built around a 700 year old Jackalberry tree. One of the facility highlights was the bucket shower- with a view of the bush and open skies.

The meals were unbelievable considering the remote location of the camp. We had wonderful pork chops, steaks, and stir fry all cooked over an open fire. Salads, side dishes, and deserts were abundant- except when the baboon stole the ginger cake!

There are no fences in this camp, as was evident by several wonderful encounters with the wildlife: the Nyala that had to be shooed away from the bathroom entrance; the Hyena that was an uninvited guest at dinner; the Giraffe grassing on the nearby ridge while we enjoyed morning coffee on the deck; the Baboon that stole the ginger cake and oatmeal from the open-air kitchen; and the roar of distant lions as a morning wake-up call. 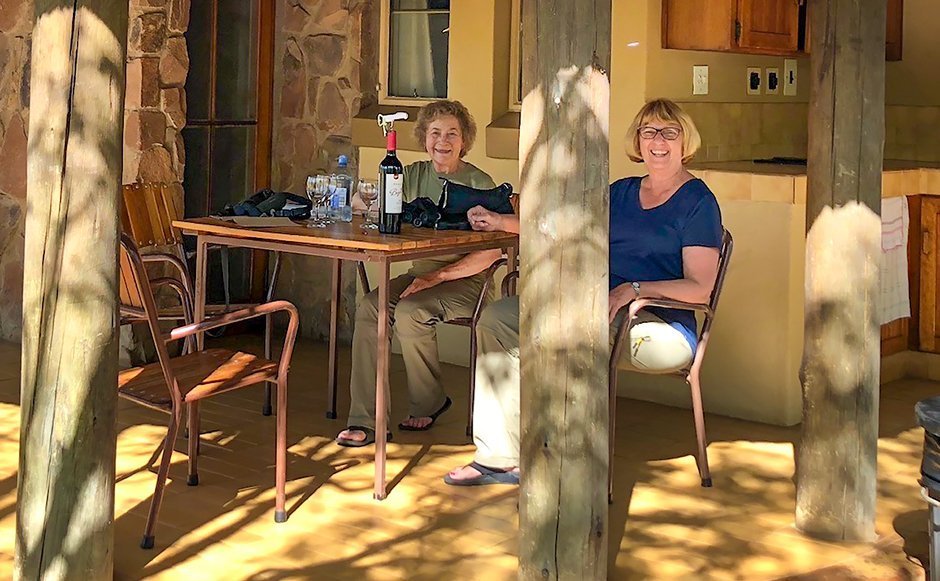 Nothing gets you closer to the African bush than a walking safari. We would leave camp around 6 am, at a leisurely pace and see what the morning would bring. We learned about trees, shrubs, elephants and velvet red mites! While peacefully walking up a ridge, we were surprised by two huge elephant heads, and as we retreated carefully back down, a herd of 17 thundered down the hill just yards away from us. We saw Cape buffalo, Giraffes, Zebras, Baboons and Impala galore.

And of course there were multiple species of new life birds- Southern Ground Hornbills, African Scops Owl, Hamerkop, and Wooly-necked Stork were some of my favorites. On one walk, we saw fresh lioness tracks, followed circling vultures to a fresh leopard kill, and tracked a white rhino with quick glimpse of him all on the same morning! In the late afternoons, we would go for a drive in the two open air land rovers, Nessie and Nikita. 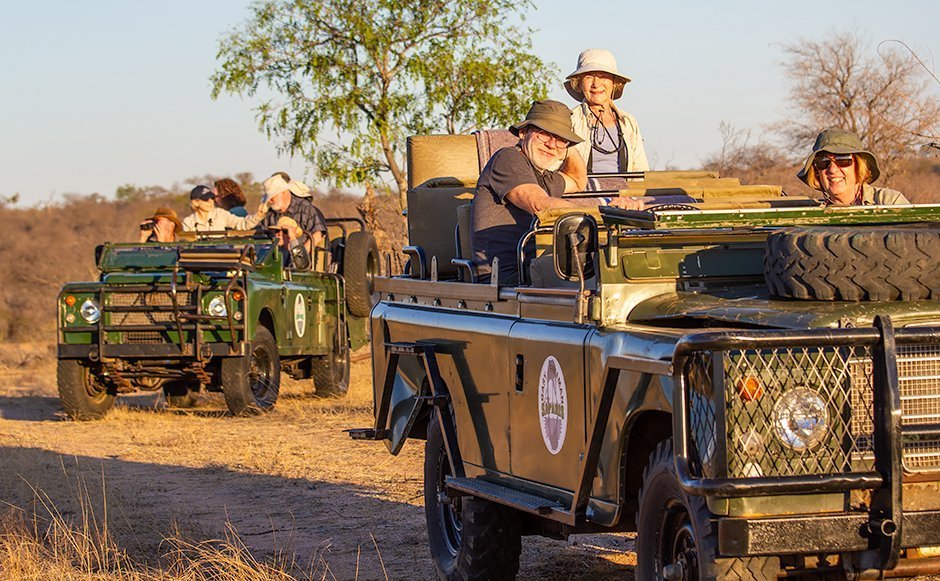 Besides seeing more birds and animals, we would enjoy the South African tradition known as a “sundowner”. Gary and Steve would make gin and tonics on the hood of the land rover, and we would all toast the beauty of the sunset and the camaraderie of our group. 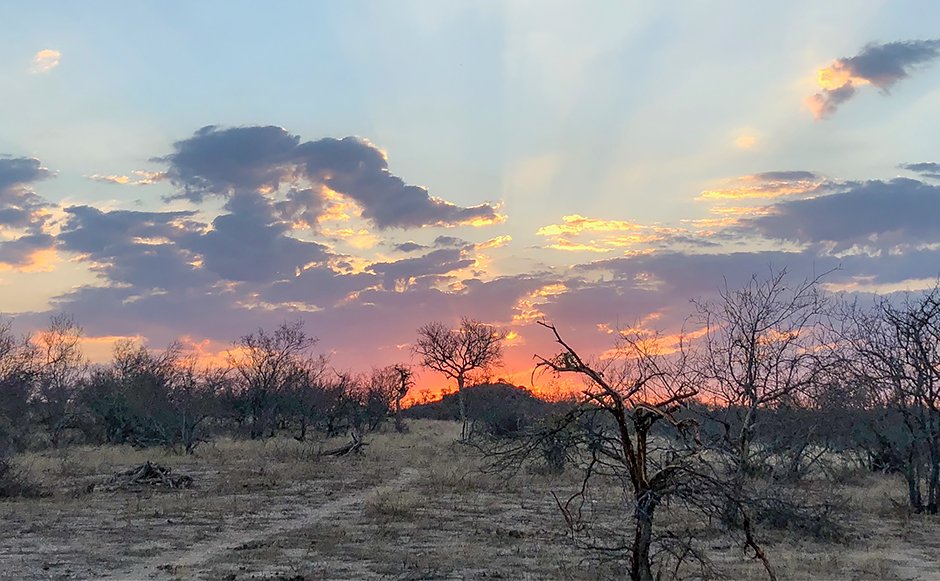 It was hard to leave the wonderment of Gary’s camp, but on day 6 we set out for new adventures in Kruger National Park. Our ride was no longer an open air vehicle; rather we were now on safari in comfortable, new, mid-sized SUVs. We each had a window, but it didn’t take long before we were climbing on top of each other to see what was on the other side of the road!

Entering Kruger through the Phalaborwa Gate, we were greeted with two White Rhinoceros, napping in the noonday sun! We took this as a good sign, and we were not disappointed during the next six days. I have frequently seen mixed flocks of birds, but Kruger was my first experience of seeing “mixed herds” of animals in the wild. Elephants, Zebras, and Giraffes were abundant in the same field of view as we slowly drove along paved roads enjoying the majesty of Kruger with its Mopane woodlands and open savanna grasslands. 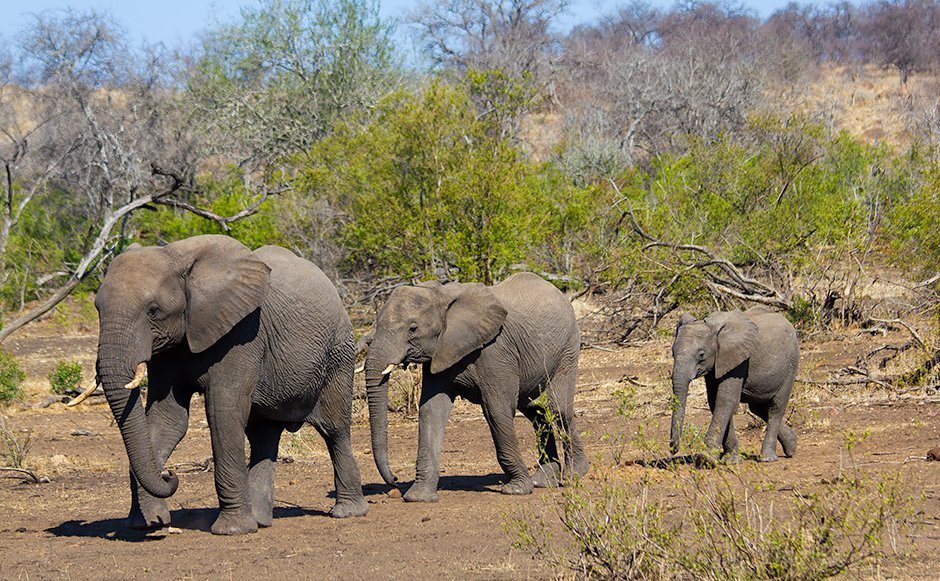 We spend the next five nights in 4 different national park camps, working our way to the Northern area of the park. The Elephant Education Center in Letaba was a highlight, as we learned about these majestic animals. We were fortunate in viewing a huge herd of over 30, crossing the road in front of us while we sat in quiet wonderment. We also observed a very moving event, when a large adult elephant stood alone in the middle of a circle of dried bones, gently touching the pieces as she swayed back and forth mourning the loss of an old friend or relative. 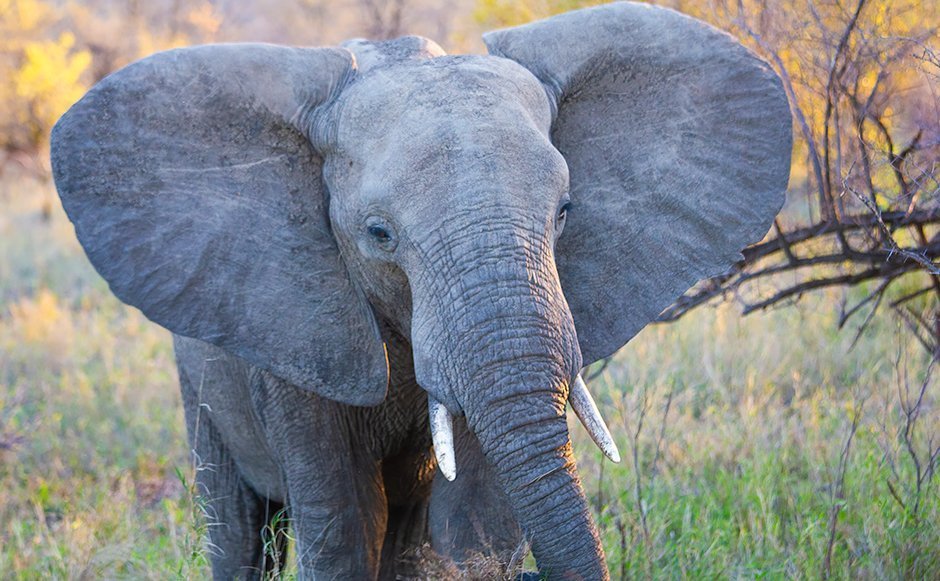 The river by the Shingwedzi camp proved to be one of our best water viewing spots, where elephants actually frolicked in the water as Saddle billed storks, Open billed storks, and Goliath herons stood by. The hippos just lumbered around in the water, not being disturbed by anything. It was near here that we found my target bird-the awesome, weird looking Secretary Bird! Two of them were strutting along just off the road with their guiles blowing in the breeze- on my birthday! What an awesome present!

Does this kind of trip sound like fun to you? Check out our UPCOMING TOURS!

The terrain changed as we entered the northernmost area of Kruger and the Punda Maria camp. There were wooded areas and low rolling hills, thick vegetation along the Limpopo River and rock formations that spoke of lion country. On one afternoon drive, we were feeling somewhat disappointed that we had not seen any large cats. As we jokingly began to sing, “Wondering where the lions are”, Gary spotted a form under a distant tree. Our binoculars showed a large lioness sleeping, with two cubs cuddling her in the late day shade. We were no longer disappointed!

This area was rich in Baobab trees, also called “the tree of life.” One wished the huge, upside down looking trees could talk, and tell the stories about all of the animals they had provided shade for during their hundreds of years of life. 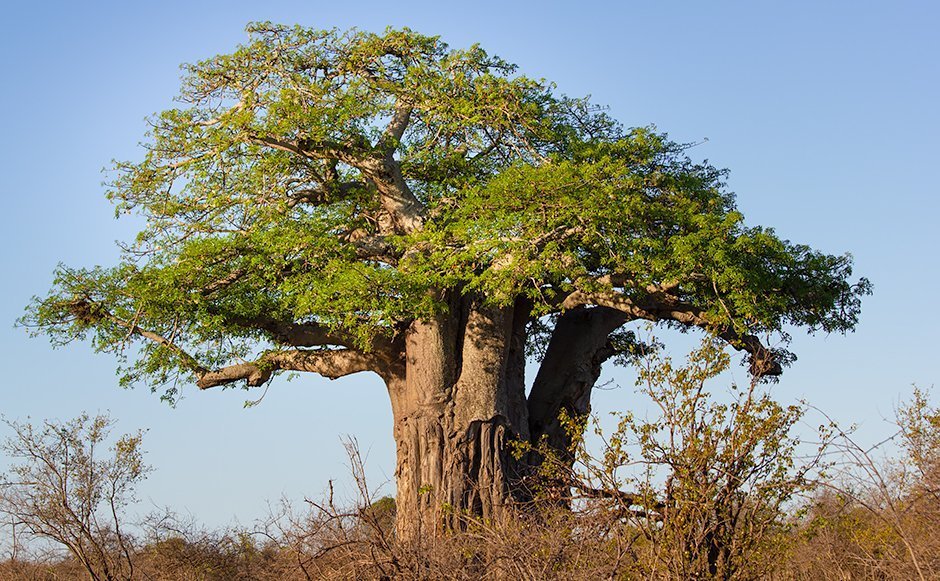 Our last night in Kruger was spent at the fanciest, most touristy camp, Mopani. We were somewhat skeptical about taking the “Disney like” night drive, but we were really glad we did. During the two hour drive we spotted African Wild Cats, a Genet hanging out of a tree, a Honey Badger scurrying across the road right in front of us, Hyenas and Jackals, and a grand finale of a Leopardess with two cubs enjoying a fresh Waterbuck kill!

On our drive to the Orpen Gate, to exit the park, we were thrilled to see a pack of Wild Dogs sleeping under nearby trees, and a flock of magnificent Ostrich, with several adults and eleven fuzzy chicks as our departing goodbye.

On the final leg of our South Africa adventure, we knew we were heading for the city, because our guide Gary was now wearing long khaki slacks instead of his bush shorts! We flew to Cape Town, and spent our last three nights on the most Southern area of Africa, exactly half way around the world from our hometown of Portland Oregon.

The Chapman’s Peak Hotel in Hout Bay was a wonderful place to stay during the final days of our journey. We learned first-hand of the severe water shortage in the area, as we experienced hand sanitizer instead of running water in the public restrooms, and a bucket in our shower to collect excess water.

Our city excursions included a morning in Kirstenbosch Botanical Gardens, chasing Cape Sugarbirds with their long flowing tails, Southern Double Collared Sunbirds, and an African Goshawk. The not-so-enthusiastic birders in the group loved the winding trails and beautiful flowers, shrubs, and trees in the park-along with the wonderful gift shop for souvenirs.

We hurried on to Table Mountain, where we rode the rotating cable cars to the top, through the clouds for breathtaking views of the ocean and city. The fog settled in, and it was like we in a surreal world, where we hiked along a stony path with alpine vegetation and Red Winged Starlings leading the way. The day ended at the Cheetah Outreach Center, where we learned about the amazing efforts to promote the survival of the free-ranging South African cheetah. The Anatolian Livestock Guarding Dog Project was especially interesting as it is a successful, non-lethal means of predator control. And, of course there were birds in the wetlands surrounding the Cheetah program. We saw our first Southern Red Bishops, Comb Billed Ducks, and Little Grebe.

Cape Town highlights included a gorgeous drive to Cape Hope, where we walked up a long trail to the lighthouse, avoiding contact with the rambunctious baboons along the pathway. We visited Bolder, where there was a huge colony of South African Penguins just hanging out with hundreds of Cormorants. The last morning some of the group visited the famous street markets, but the die-hard birders went to Rondevlei Reserve where we were rewarded with more species sightings. We added Yellow Bishop, Great White Pelican, Purple Heron, and Great Crested Grebes to our bird list.

We ended up with 192 species of birds on our group list, and every target mammal that we hoped to see. This was my first trip to Africa, and my first trip with Wild Latitudes, but it will not be my last for either. A special thank you goes out to our guides, Steve and Gary. They truly made this a once in a lifetime adventure. After 14 days of new explorations, I left South Africa with a renewed reverence for life- in all forms… and for water.