Birding Without Borders – An Interview with Noah Strycker

Noah Strycker is one of the world's best-known birders. In 2015, he set a crazy goal and ending up doing something nobody had ever done. His latest book is about that big year.

Well, at least that’s what he wrote on his immigration forms for many of the 41 countries he visited in 2015.

Noah spent all 365 of his days that year birdwatching across the planet on an epic quest to see 5,000 species. He chose that number because it is roughly half of the known number of bird species on Earth.

If he succeeded, he would also be the world record holder for the most bird species seen in one year.

Not only did Noah succeed, he far surpassed his goal by seeing a total of 6,042 species. ‘Bird Man,’ indeed!

Birders sometimes set out to see as many species as they can in one year in a defined country, state, county, etc. This is known in birder lingo as a ‘big year.’ In 2015, Noah had the biggest year in history.

Birding Without Borders is Noah’s recently published book that tells the story of his global Big Year. He has been giving presentations about the book and his adventures all over the place these last few months.

The book is great and I highly recommend it!

Like me, Noah lives in the state of Oregon. I was lucky enough to spend a little time with him to chat about the stories in his book and more.

We met up to talk and to get a look at a Yellow-bellied Sapsucker that has been hanging out in Portland for a few months. This species is very unusual in Oregon, so it would be an exciting bird to see here.

Check out the VIDEO above to see my chat with Noah Strycker.

Here are some highlights from the interview 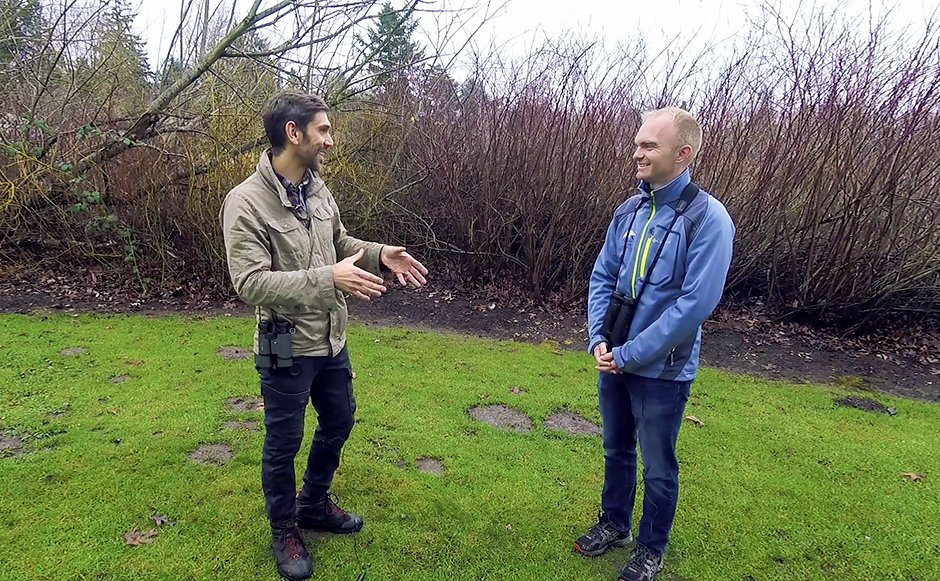 Ivan Phillipsen: “How has your perspective changed on birding in Oregon– in your home region– and on the birds here… has it changed at all?”

Noah Strycker: “Yeah, what was really cool was to spend this whole year birding around the world and seeing all these exotic birds… and then coming back home, it was like, coming back to see old friends… the Chestnut-backed Chickadees and Steller’s Jays and even the American Crows and the robins… I like making a list of new birds that I’ve never seen before, but I also like getting to know the same bird, repeatedly. I could sit and watch a crow all day long.”

Ivan: “So you’re a young guy… you have what is a very large list of species that you’ve seen already… you have a long life ahead of you… do you have any interest in trying to see a lot more of that diversity, pushing towards all of the species?”

Noah: “…There’s a couple guys now I think who have seen more than 9,000 birds. There’s about 10,500 total. I don’t think anybody will ever see them all. Even the top listers now are still missing a thousand species, and they’re really hard ones: that may or may not be extinct kind of thing, or in war zones, that kind of thing. I guess my goal has never been to life list every bird in the world. I’m more interested in pursuing specific projects and learning in-depth about some bird, or going on an adventure with birds in some defined capacity… rather than just trying to ‘collect them all.‘

Ivan: “What would you tell someone on the street about the attraction of birdwatching?”

Noah: “I think that birds are inherently fascinating on their own and people just don’t realize that and they don’t pay attention, usually, and they don’t realize how many birds are around us. So if you can get someone just to look at a bird… in some situations anyway, they’ll suddenly be like this light-bulb goes off and they’re like, ‘Wow, that’s super cool! I didn’t even realize this bird lived here behind my house!’… I think that people are separated from nature now in ways that we haven’t been for most of human history, and just getting outside and getting reacquainted with it is satisfying in a lot of ways. And I think people need that in today’s digital culture… and birding really helps. Birds are on their own colorful and loud and they have beautiful songs, and they’re easy too see… they’re diurnal… so they are a good ‘gateway drug’ to caring about the rest of the environment.”